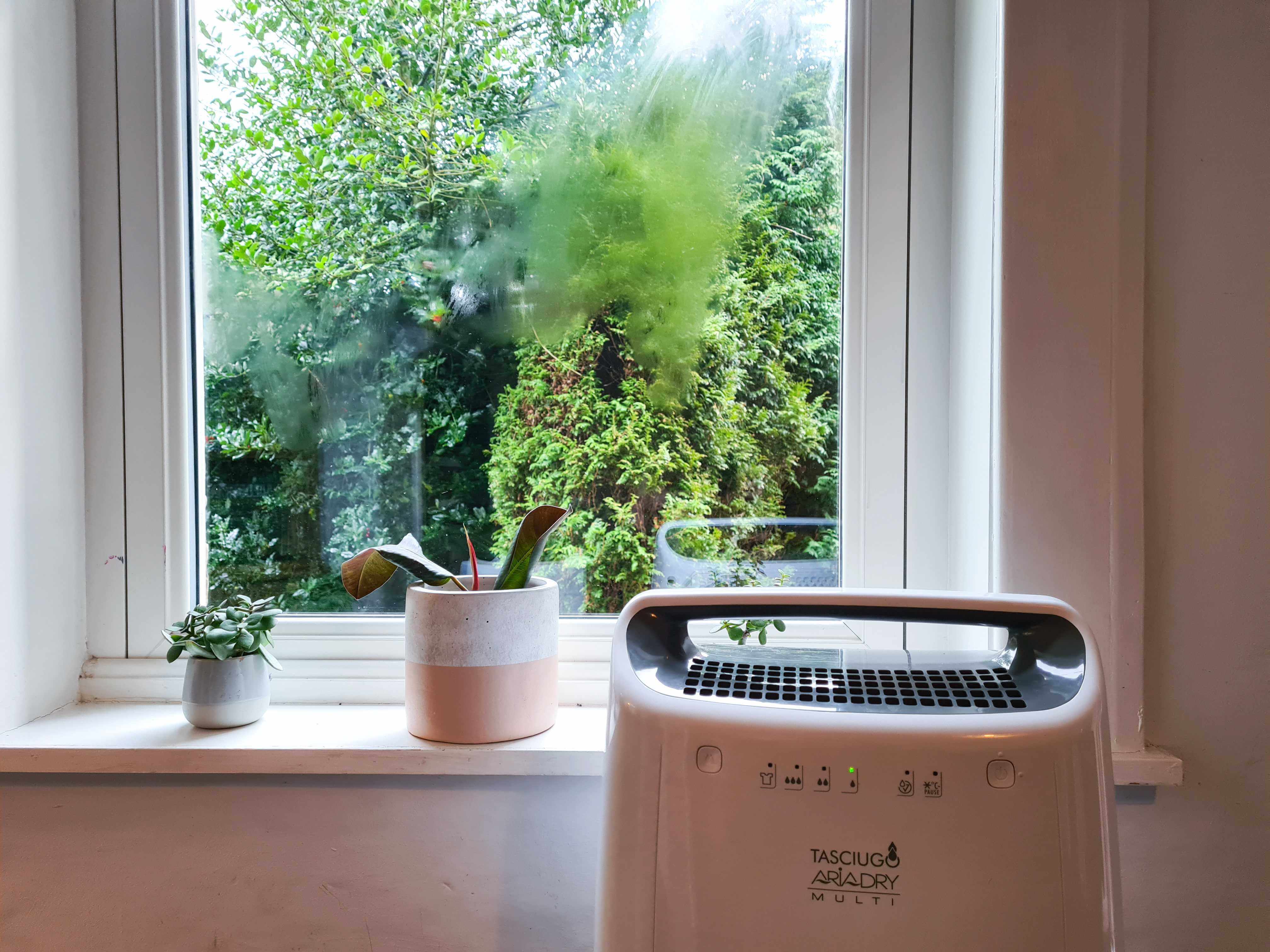 Jeanne is our newest air quality aficionado/writer. Still shocked by the arrival of Summer 2021 wildfire smoke from California to her Maryland (East Coast) home, she’s forever indebted to her HEPA filter-equipped air purifier.

A dehumidifier will not remove airborne contaminants from indoor air. It will instead remove moisture and reduce the relative humidity in your home, making it less hospitable to mold growth and dust mite reproduction.

With outdoor air pollution on the rise and Covid-19 still a concern indoors, clean air in your home is more than just a nice thing to have. It’s a medical necessity for many.

This is especially true if you’re like most people and spend 90% of your time indoors where air quality could be 2-5 times worse than it is outside.

So you may be wondering: Do dehumidifiers clean the air?

The short answer is; sort of.

Dehumidifiers serve an important role in your home in several ways. In fact, dehumidifiers contribute indirectly to cleaning indoor air of some airborne undesirables.

Here you’ll learn exactly what dehumidifiers do. Then you’ll know if a dehumidifier could help you solve your specific indoor air problem and get cleaner air.

Does a Dehumidifier Clean the Air?

If you’re asking this important question, then you probably want to know if dehumidifiers actively remove airborne contaminants from indoor air.

Dehumidifiers lower the amount of water vapor from the air in your home, making it unlikely that some airborne contaminants will survive.

So, in a sense, dehumidifiers clean the air as their action results in fewer contaminants.

Unfortunately, a dehumidifier will have no effect on most air pollutants in your home.

Do dehumidifiers remove contaminants from the air?

Unless they are specially equipped with a HEPA filter — which they typically don’t have — dehumidifiers do not take out the invisible nasties floating around unwelcome in your home such as:

By reducing the amount of moisture in the air, dehumidifiers eliminate the conditions in which mold, microbes, and dust mites thrive in. Usually, this means there will be fewer to no airborne mold spores, bacteria, viruses, and dust mites in your home’s drier air.

However — and this is huge — if dehumidifiers work too well, meaning the water vapor level in the air drops below 40%, many microbes will remain alive or at least viable, afloat in the air.

To get rid of these pesky microbes once and for all, a dehumidifier won’t help.

Which airborne contaminants will a dehumidifier control?

Without a great amount of water vapor needed to thrive, mold and dust mites will die or become dormant falling to the ground, leaving you free to vacuum up dust mite cadavers and their waste products.

On the other hand, bacteria and viruses often flourish in both dry environments and very humid ones, too. So, it’s a matter of hitting that relative humidity sweet spot to control those airborne microbes.

Incidentally, dehumidifiers do little to nothing to remove non-living airborne pollutants such as volatile organic compounds, unless they are equipped with an advanced filter (which they usually are not).

According to research published in the International Journal of Hygiene and Environmental Health, relative humidity in your home between 40-60% is best for lowering your risk of infection and keeping mold and microbes in check. How much they remove — and how fast — varies according to the quality and brand of the dehumidifier.

Even moderately priced dehumidifiers usually come with a built-in device — called a humidistat — to set the desired humidity. The appliance will shut off once that level is reached, and kick back on once the ambient humidity gets too high.

If your dehumidifier is not so equipped, a portable hygrometer will come in handy and enable you to gauge relative humidity in your living space.

What Do You Need To Clean the Air?

If you want to clean your indoor air by removing contaminants permanently, you need an air purifier.
Unlike dehumidifiers which only extract water vapor from indoor air, good quality air purifiers are capable of removing air pollutants from your home environment.

Air purifiers are, by far, the best way to remove pollutants from the air in your home. They are basically a fan that pulls in the contaminants, attached to a filter that traps them, leaving you with clean, healthy air being put back into the room.

In general, air purifiers can remove the following airborne pollutants from your home:

What types of air purifier filters are there?

There are currently five major types of air purifiers on the market.

Depending on their filter, air purifiers may remove even the smallest of airborne contaminants known as ultrafine particles (PM0.1). This type of air pollutant is able to penetrate deep into your body where it is believed to remain lodged for long periods and cause serious health problems.

Many people think that dehumidifiers clean the air, but this is not really true.

Dehumidifiers remove water vapor from the air. This reduces the relative humidity inside your home. When the indoor air is drier, mold and dust mites typically die off or go dormant. It’s only in this indirect sense that dehumidifiers clean the air.

To clean the air inside your home, you need an air purifier. Whether you suffer from allergies, asthma, or any respiratory illness, or just want to breathe clean air in your home, a good-quality air purifier will meet your needs.

Will a Dehumidifier Kill Mold?

Natural Ways to Dehumidify a Room Without a Dehumidifier

What Causes Musty Air in Your Home? (and a 5-Step Solution to Solve it)

What To Do When Your Dehumidifier Ices Up

How Much Electricity Does a Dehumidifier Use?